LYME DISEASE IS A PARASITIC INFECTION!

Borrelia Burgdorferi is a small PARASITE, transmitted by a tick, that initially invades the blood of the human and from there it travels to different organs and tissues of the host.  Borrelia is a parasitic infection not  just a bacterial infection, unless bacteria is looked at as a small parasite.  I have not read an article or a message anywhere that states this I have said here above; every where it is said that Borrelia is a "Bacteria" and it is not specified that it is an intracellular bacteria, meaning a parasite.

Of course by treating Borrelia as a bacteria the management of the parasitic infection might not be adequate or sufficient and the parasite might be having options to survive better and to even kill the host. Not saying that Lyme Disease might also have parasitic co-infections is another negligence that must be addressed to save the lives of many people..

Simple observation leads to the obvious conclusion, no need to be a scientific: "Intracellular parasites, such as bacteria or viruses, tend to rely on a third organism which is generally known as the carrier or vector. The vector does the job of transmitting them to the host."  Parasites, meaning big bugs, meaning bugs that can grow and act very different from a small almost invisible bacteria:  " Parasites evolve in response to defense mechanisms of their hosts" - this is not an act of an insignificant organism!

Borrelia is transmitted by a tick the same way as the "Plasmodioum" is transmitted by the mosquito when it generates the illness we call Malaria - in the endemic areas of Colombia we call it "Paludismo", same thing.  When the tick bites his saliva spreads the bacterial and parasitic infections, as any other infections caused by a vector, meaning by an insect or a spider; that is why Lyme Disease is called a "Vector- born Disease".  This is CDC explanation about it: "The term “vector” refers to any arthropod that transmits a disease through feeding activity".  See?  transmits a disease but the difference here is that it doesn't transmit a simple fever that goes away with two weeks of treatment; the American TICK transmits a multi-parasitic and poly bacterial infection that causes a severe septicemia invading blood, organs, brain, bones, lymphatic system, circulatory system; feeds of tissues like the heart and the kidney and doesn't kill the host until years of pain and suffering.

And again, symptoms caused not only by a bacteria but by a parasite that evolves and responses to a treatment in a very different way than a regular bacteria; this is a protozoan that goes inside the cell or runs outside depending on the conditions; it is a little animal surviving and feeding from our tissue. Plus, because it is a strange body inside our body, bacteria is produced around it and this becomes a mini ecosystem inside the human body where the bacteria feeds off of the left overs of the parasites, and the bigger bugs hide behind the bacterial infection; multi parasitic - poly bacterial, plus viruses interacting, all together devouring everything around and moving and setting their camps in different places of the body.  It is said that Borrelia even jumps inside the white blood cells that come to attack her so now the immune system is infected and is taking that infection to other parts of the body, plus it becomes unable to kill the infection unless destroying itself...  if this doesn't sound like madness I don't know what is!

Tell me, is this something everyone knows and I don't? Is it that I am just "discovering the hot water"?  If so, why every article about Lyme Disease states it is a "bacterial" infection and why it is not publicly said that Borrelia Burgdorferi is really a PARASITE transmitted by a tick - some say it is also transmitted by lice and flies, I don't know. Yes, a parasite that comes inside the body of the human being when bitten by the tick, something so obvious as it is said when the malaria is transmitted.  Why this incredible obvious truth is denied?  just to neglect the reality that the US has a parasitic infection as severe or more like the third world countries diseases?  is it possible to hide a piece of this truth to soften the cruel reality and to maintain power?  Or it is said everywhere that Borrelia is a bacteria, to not scare the public?  LOL? Where in the world can a parasitic infection can be hidden and denied like if it won't hurt or won't hurt so bad?

If, in fact, a bacteria transmitted by a host, called an "intracellular bacteria" is a parasite, but small, that type of organism will require a special treatment, to eradicate it, to kill it,  different from a regular bacteria acquired by, for example, a cut or a pinch in a finger?  and this, again obvious reasoning will bring to question why, Borrelia Burgdorferi, such intracellular bacteria that lives and functions as any other big parasite is being medically treated with just two weeks of a regular antibiotic like if this will be enough to kill such complicated organism?  Have you heard of people getting cured of malaria after receiving two weeks of Doxycicline or Amoxacillin?  so why the ones infected with Borrelia Burgdorferi, a very well known smart parasitic organism, are treated as if they just had a minimal regular  infection?

More over, if the time has shown that the tick bite transmits not only Borrelia, who now we know it is a parasite, but also Babesia, an old recognized ferocious parasite and simultaneously the saliva of the tick also spreads other bacteria and co-infections such as the terrible Bartonella, Erlichia, Rickettsia - the causative of thyfus fever - and various viruses, how come this is treated like a regular infection, if this is a deadly bomb?
Read what CDC states: "Lyme disease is a tick-borne illness caused by infection with the bacteria Borrelia burgdorferi." "The bacteria that cause Lyme disease are transmitted through the bites of infected ticks." "Within days to weeks following an infectious tick bite, most patients (about 80%) develop a red rash called an erythema migrans (a.k.a., “EM” or “bull’s-eye” rash) around the bite site.  This rash slowly expands (up to 12 inches in diameter and clears around the center, but does not itch.  It is usually accompanied by general tiredness, fever, headache, stiff neck, muscle aches, and joint pains.  If untreated or not properly treated, some patients may develop arthritis, neurological problems, and/or heart problems weeks to months later.  "  "When Lyme disease is detected early, it is treated with oral antibiotics such as doxycycline or amoxicillin and treatment usually lasts for 10-21 days. In the later stages of Lyme disease, antibiotic treatment lasts longer, is more complicated, and patient response to treatment is slower." ... how can they be so far from the reality we Lyme Disease patients live? 10 days of treatment for what?

I am no expert in medicine nor in infectious diseases nor in bugs but I just ask since when or where  in the human medical history parasites are killed with two or three weeks or Amoxacillin, or Doxycicline?  No need to know a little better than that, the logic states that bigger bugs need antihelmintics or vermifuges not just  antibiotics.

Just this recommendation from the wise, from the experts in avoiding the proliferation of infectious diseases in the US is a wrong beginning.  Why would CDC ignore a parasitic infection and call it and treat it as a bacterial infection?  It is also scary to read that CD states that "Spread of the Lyme disease bacteria from an infected tick to a person is not likely to occur unless the tick has been attached to the person’s body for at least 36 hours."... not true!  The tick bites and  in it's mouth is the contaminated saliva, and it is passing it at the same time and as soon as it starts sucking the blood from the host. What logic states that the bacteria takes 36 hours to pass to the human body?  if the same CDC states that the infection could be spread just by trying to detach the tick, just by touching it with the bare hands, something immediate, imagine what can come every second the tick is attached sucking blood?
By the contrary of what CDC states,  experience has shown that everyone bitten by an infected tick gets the infection and needs to be urgently treated, so ignoring it is a parasite and then the severity of the  fast transmission of the infection  is another serious imprecision that causes an increase in the lack of proper, adequate treatment.

Now, has anyone seen a Borrelia?  some have pictures of it taken by microscopes or using special magifying lenses; but someone has seen a Borrelia when it evolves and grows and invades the intestine and other organs of the human body?  why it is said that Borrelia is so hard to see and to study  if it is a parasite and by being this type of organism you can see it with your "bare eyes", easily!  Not when it is hiding in the blood, nor inside the tissues but when it evolves to a regular worm life and goes to the intestines for example,  it can be seen and studied, like another regular big bug.  Is this new to medicine or maybe this is the result of  the absolute denial of the US when affirms that there are not parasites in this country? and this ignorance covers the possibility of treating and curing the sick people suffering with parasitic infections?

If Borrelia is not hidden under the false idea of a bacteria, stool sample tests could be finding Borrelia and adequately treating patients according to their level of infection.  Is this new to science again?  The similarity of the intestinal parasites expelled after receiving proper treatment, with the Borrelia shown inside the blood are shocking; the bug maintains it's shape but can grow to one or two inches, passing from being an almost invisible bacteria to a big powerful worm.  This is shocking news; prove me wrong!

Now, It is finalnally said that 40% of American ticks transmit "nematodes" which are parasites, some call them worms. Studies state thet Dr Willi Burgdorferi, who discovered the Borrelia, found 30 types of microfilarial worms in an adult tick, which might lead to conclude that if people is indeed infected with various types of parasites the treatment with just antibiotics given from 2 to 4 weeks is not going to clean the infection.  This certainly is the answer of why ill people relapse and cannot get completely cured.  Those cases cataloged as "Chronic Lyme Disease" could be just cases of people who have parasitic infections not properly treated.

It seems to me that by denying that Lyme Disease is a parasitic infection the wise are denying at the same time proper treatment, proper diagnoses, proper lab test, proper and adequate cures and medicines desperately needed.
Hope Lyme Disease patients are treated correctly and cured; yes cured, because no matter how many say there is no cure for Lyme Disease yet, until someone treats it like what it is, a parasitic infection with bacterial co-infections. Amen.

Wikipedia  http://en.wikipedia.org/wiki/Parasitism#Types_of_parasitism
Posted by MJ at 10/31/2010

If your comment might help, go ahead and write it! I reserve the right of publishing and answering! 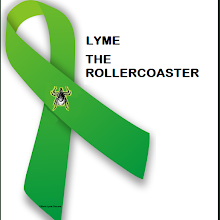 MJ
Orlando, Florida, United States
As many others, suffering multiple symptoms. Finally a Doctor in Maryland diagnosed me with LYME DISEASE! His blog www.lymemd.blogspot.com Hope my comments might help others too! Very thankful with many that have helped me and have given me so much love! Please excuse my writing, I'm just learning English! Just wonder why there's so much negligence around this illness...?